This section allows you to view all posts made by this member. Note that you can only see posts made in areas you currently have access to.

QuoteThis "Kid" seems to be uninformed. Using terms as "what is ours and what we deserve" is incorrect.

Exactly right ... nothing is "ours" until it's in the contract and signed by our president and Neil. Before that we don't have shit.

Ok ok what we deserve....better lol. We deserve to be treated as equals under 1 contract. Enough of the 2-3 day pay checks when others get a full week, enough of worrying what holidays we get paid for or not, enough of this 12 years to top pay bullshit. Give us full weeks, give us 6 years top pay, give us holidays. Im tired of picking runs to make sure I get a full week no matter what because I have to have a Jewish/catholic school on my run. We shouldn't have to worry about that as well. Enough separation and unite is as one with one contract. People from 2013 want to get taken care of and recent hires are tired of the worrisome. So as Buzz said it's either give us what we deserve or strike.
2

November 26, 2022, 06:13:29 PM
My father who was involved in the strike told me nobody ever wins in a strike. At the end of the day people hired after 2013 want what they deserve. If it comes to a strike which would suck then so be it. This is our moment to get what is ours and be treated as equals by being under 1 contract. As stated people are all talk but I think this time around people are I'll walk the walk because if we don't get what we deserve people will leave pioneer and go drive for a different profession making way more money than they are now with less headaches and responsibilities. This is our moment to get what we want need and DESERVE which is guaranteed weeks for all, all
Holidays and top pay cut in half. You guys were us at one point so you have to see where we are coming from. You guys got what you wanted now it's time for us to get what we want from people hired 2013 on
4

QuoteNope! I'll be getting my first Xmas week and Easter week this year and I'm 3 years on the job...See the bullshit that's pulled lol. 3 years almost 4 to get the Xmas and Easter check ...

I don't see the conflict.

No conflict it's just bullshit to wait that long
6

Quote from: mirrorcheck on November 22, 2022, 06:59:41 PMKid you did get paid for Christmas week already correct ? ( unrelated just asking since you got on in 2019 do you remember when you got that week?) also you should have gotten Easter already too correct ? Thanks

Nope! I'll be getting my first Xmas week and Easter week this year and I'm 3 years on the job...See the bullshit that's pulled lol. 3 years almost 4 to get the Xmas and Easter check when I got on as a new hire and all the holidays spread out one per year after first year. Again why this contract needs major changes. And it's most holidays we get now not all. I was originally told the opening offer for top pay was 19 years then 15 then they settled on 12 🤦🏻‍♂️
7

Quote from: mirrorcheck on November 22, 2022, 06:59:41 PMKid you did get paid for Christmas week already correct ? ( unrelated just asking since you got on in 2019 do you remember when you got that week?) also you should have gotten Easter already too correct ? Thanks

Nope! I'll be getting my first Xmas week and Easter week this year and I'm 3 years on the job...
8

If you're saying you were never given this before you were hired I'll have to take you word for it, but you're a rare exception.

But what do you mean it says nothing about the job? It's everything ... especially the negatives ... in a nutshell.

November 22, 2022, 05:25:09 PM
This needs to start being looked at as an actual job as well not just a retirement job. Gotta start looking at the future and protecting drivers to carry out the industry with a better contract to keep and bring drivers in
11 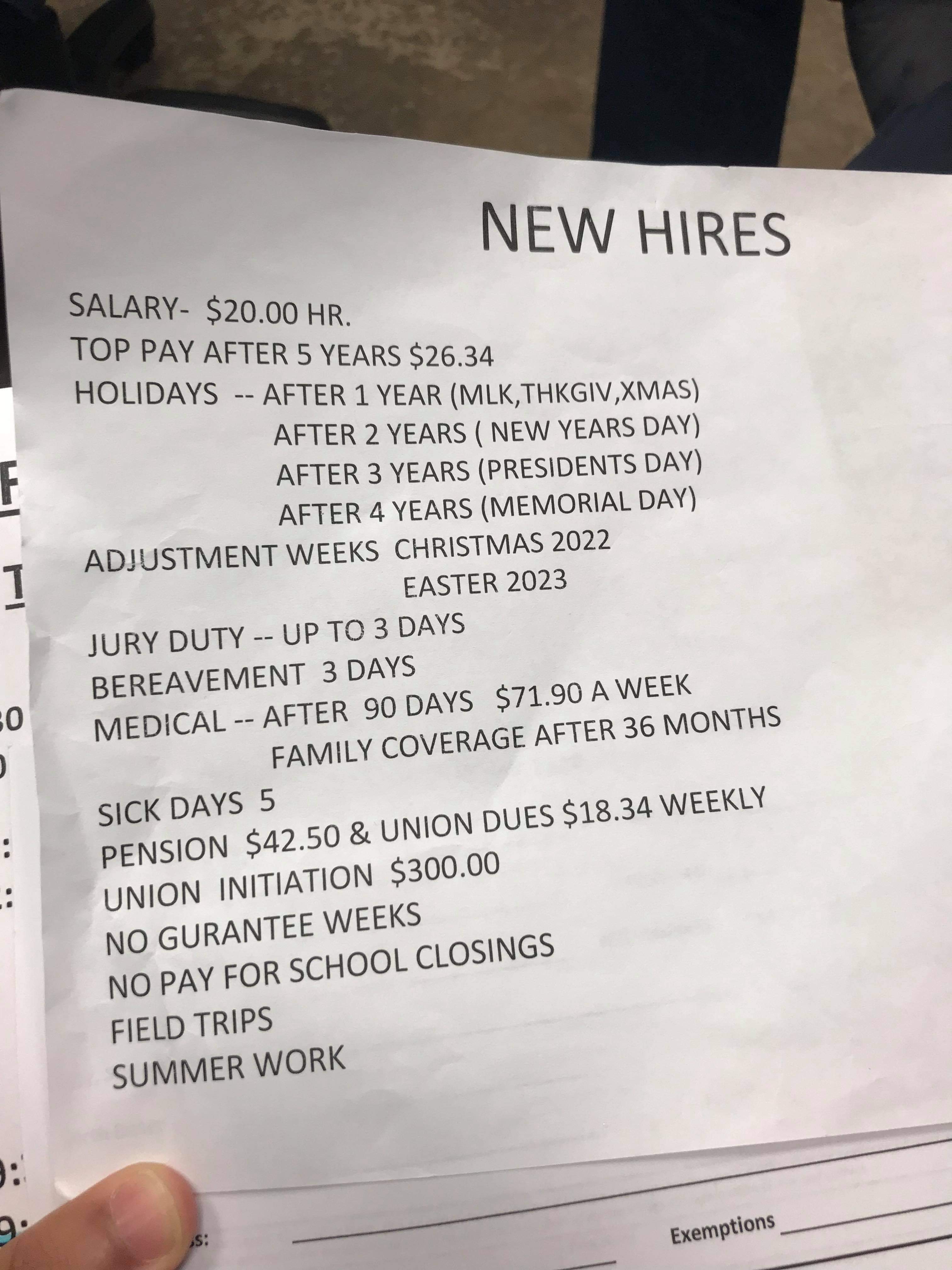 November 22, 2022, 11:55:07 AM
They screwed us drivers big time during the pandemic. Only way to solve this is to make this job attractive by bumping up the starting salary, cut to play in half and an overall better contract. Until then they won't get drivers to stay nor come into the business.
13

November 19, 2022, 02:31:20 PM
All I know is this year we finally get our Xmas and Easter checks lol. Next year fingers crossed for guaranteed weeks, top pay 6-7 years and all holidays which I heard the union is pushing hard on the owners
14

Work Related / Re: VIA program fines

Quote from: Buzz on November 19, 2022, 12:51:37 PMOPT loves beating a dead horse so it's going to be a while before they give up on this fiasco. Can only wonder how many millions were wasted. In the meanwhile, we're the victims ... again.

My dad is a former driver for Atlantic Express...when I got in this 3 years ago he said be prepared that no matter what happens it will always be the drivers fault even when it is far from the drivers fault
15

QuoteJust saw my check today 324 dollars where do I find motivation to get up and get the bus if I was making more money when I was 12 .

I agree and sympathize with you guys 100%. This current contract screwed you guys royally. It's not fair at all.

The thing I don't understand is, if you knew this when you signed on, why did you accept such a lousy deal and take the job?

They withheld a lot of shit at the time of hire to the point you find a shit load out working on the job. I was shown and given a different piece of paper contract wise at the time of the
Hire 3 years ago that is opposite of what it actually is.
Pages1 2 3 ... 17